The movement toward more fluid and flexible Software Defined Networking (SDN) constructs is alive and well. Today Oracle became the latest vendor to jump into the space by way of an acquisition. Oracle announced its intention to acquire Xsigo for an undisclosed sum. The deal is expected to close in the fall of 2012.

Xsigo is a privately-held company founded in 2004. Xsigo has a series of products that deliver SDN capabilities giving enterprises greater control and flexibility of cloud workloads. Among Xsigo’s products is a Fabric Director, Fabric Accelerator and a Fabric Manager. According to Oracle, Xsigo’s products are complementary to Oracle’s own virtualization and system stacks.

“The proliferation of virtualized servers in the last few years has made the virtualization of the supporting network connections essential,” said John Fowler, Oracle Executive Vice President of Systems. “With Xsigo, customers can reduce the complexity and simplify management of their clouds by delivering compute, storage and network resources that can be dynamically reallocated on-demand.” 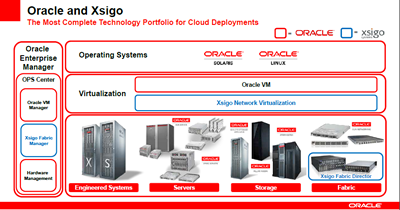 “Xsigo simplifies cloud infrastructure and operations by allowing customers to dynamically connect any server to any network and storage, resulting in increased asset utilization and application performance while reducing cost,” Oracle’s FAQ on the deal explains. “Because Xsigo consolidates and virtualizes the physical resources utilized to interconnect servers and storage, Xsigo is uniquely positioned to simplify the management of virtualized server and storage connectivity.”

The acquisition of Xsigo is also proof positive that the SDN market is a hot one. Just last week, VMware acquired SDN vendor Nicirafor $1.2 billion.

“In our view, the acquisition is a testament to the momentum behind software-defined networking (SDN) and network virtualization technology and a sense of urgency among large IT vendors to position themselves following VMW’s acquisition of Nicira,” ISI stated. “Note we do not view Xsigo as comparable to Nicira or Big Switch which were founded more recently and have leveraged the OpenFlow standard for network virtualization.”