Uncontrolled or poorly controlled BYOD (Bring Your Own Device) implementations create more problems than they solve. Allowing users to access corporate resources with personal devices can introduce everything from user interface concerns to major security vulnerabilities. Combined with the increased load on help desk resources and the potential software licensing costs, these BYOD concerns can stall both  productivity and advanced technology adoption.

Campbell, CA-based hopTo makes corporate applications BYOD-ready and secures corporate data without usurping ownership of BYOD devices. In essence, hopTo Work offers everything that a workforce mobility solution should and adds value for those looking to simplify BYOD projects.

hopTo accomplishes those goals by integrating its workforce mobility platform into existing Microsoft Windows technologies. For example, the hopTo platform uses the remote desktop (terminal services) functionality found in Windows Server 2008r2 and above to create virtualized desktop environments. Those virtual desktops are then populated with administrator-selected applications, creating a custom mobile/BYOD environment.

The hopTo Work platform installs as an application on Windows Server-based systems running 2008r2 or 2012. The hopTo platform consists of two primary parts: the server-side implementation, referred to as the host, and then a small client application installed on either an Android or iOS device. Server installation involves running a wizard that installs the hopTo platform and associated supporting software onto a properly configured Windows 64-bit Windows 2008R2 or 2012R2 server . For those familiar with Windows Server, configuration should be straightforward. Prerequisites include:

Those prerequisites can be met using Windows Server Roles to configure the host server. Here, however, it would be advantageous if hopTo offered some basic configuration videos to walk a newbie administrator through the process of setting up a Windows server and configuring it for hopTo installation.

Odds are, those adopting the hopTo platform will want to use a new (or dedicated) server that has enough storage and performance to run multiple RDS sessions concurrently. Once the Windows server is configured correctly, the hopTo server agent proves simple to install and setup.

Once the server/host agent is installed, administrators will need to set up access to the hopTo host. Most of the configuration chores take place using Windows Server administration tools, such as the RemoteApp Manager and the Domain Group Policy Editor. 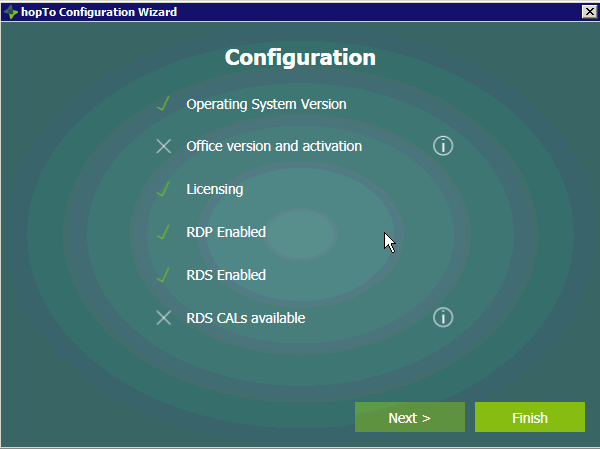 Although IT administrators will quickly appreciate how easy it is to deploy and manage hopTo Work, the real power of the product comes from the productivity and security benefits it brings to a mobile workforce. Those benefits are clear at the outset.

First off is the inherent security benefit offered by the hopTo Work product, which provisions applications via Microsoft Windows Server’s RemoteApp and RDS capabilities. No application code actually runs on the mobile device and no data is stored on the mobile device. All computing and file access takes place on a virtual machine running on the Windows Server. This arrangement keeps all applications and data safe, especially if the device is lost or stolen. The only way someone can access corporate resources is to login to those resources using the hopTo Work client on the mobile device, and Windows security policies protect those login credentials.

That security claim can be made by most any product that relies on RDP, of course. HopTo Work goes one step further by incorporating advanced encryption and policy support to further strengthen security and prevent data from being compromised or intercepted.

Another key benefit offered by hopTo Work is how it enables applications to run on non native platforms, such as iOS and Andriod, both of which favor touch interaction over traditional keyboard and pointing device input.

hopTo Work accomplishes that by placing a touch-enabled wrapper around traditional Windows applications. For applications such as the Microsoft Office Suite, hopTo Work enhances the interface to make it easier to work with on a mobile device. Enhancements include simplifying menus, adding shortcut keys to replace pointing device controls, and creating support for gesture driven actions, such as pinch, swipe and tap. hopTo Work puts a new face on applications such as MS Word to make those applications easier to use on mobile devices. Using hopTo Work on Android or iOS devices proves very easy. The product offers a concise interface that makes it simple to locate files, launch associated applications and share information. What’s more, the hopTo client application provides access to a multitude of cloud services and hosted applications, including Egnyte, Dropbox, OneDrive and Google Drive. Even those cloud services are protected by the hopTo Work platform, since they are accessed using a virtual machine and not accessed directly on the mobile device. The hopTo Work client enables secure access to cloud services, allowing users to access and share files without ever having to place those files on the local device.

Working with other applications (both cloud and Windows based) is further simplified with the addition of custom edit keys, which allow users to rely on touch commands to access commonly used capabilities on a given application. That, in conjunction with onscreen keyboard support, brings usability to applications which normally would not be supported on a touch enabled platform or device. Special keys, touch based commands and on screen keyboard access bring full functionality to applications which normally would be unusable on iOS or Android devices.

hopTo Work solves numerous problems associated with creating a mobile workforce and lends itself quite well to BYOD initiatives in two primary areas: security and productivity.

For security, the use of a virtualized environment that runs on a remote server protects sensitive data and applications from intrusion. No applications are installed on the device and no data is stored on the device, so theft or loss of the device become only a minor concern for corporate IT as long as strong password policies are in place and the hopTo Work service is effectively managed on the host side.

hopTo Work also vastly increases ease of use, especially for applications that were never designed to run in mobile, touch-dependent environments. Administrators have at their disposal several tools that make native windows applications more palatable for mobile users.

What’s more, the integrated access capabilities to cloud services and applications allows administrators to build streamlined, unified, and secure environments for end users. Succinct menus, touch-enabled controls, and a simple-to-navigate interface enhance productivity, while reducing learning curves. Other notable capabilities include the ability to share files with ease using cloud services, mapped drives, and shared folders, as well as integrated controls that allow files to be quickly attached to emails.

All things considered, hopTo Work is one of the quickest ways to incorporate mobile devices into an enterprise workforce, especially for organizations looking to pilot BYOD initiatives. The only downsides to the product arise from its dependence on administrators’ understanding of Windows Server based capabilities, such as group policies, RDP and RemoteApp configuration. However, any Windows Server pro should be able to quickly overcome those challenges and leverage the full power of hopTo Work in a short time.