Backing up active virtual servers can be a real challenge. With virtual machines come constant change, and much of the system state is stored in volatile system memory that not only stores critical information, but also caches reads, writes and other I/O operations.  Many vendors have come to the rescue for systems virtualized under the VMware banner. Solutions for Microsoft’s free Hyper-V are another matter, but London, England-based Altaro Software may have the solution. The vendor claims that their Altaro Hyper-V Backup can back up any Hyper-V server with just a few mouse clicks and still preserve everything that is critical about the virtualized system, all without interrupting operations and creating downtime.

Version 4 of Altaro Hyper-V Backup comes with a long list of capabilities and features aimed at enabling administrators to back up complex, multi-server environments sporting Hyper-V virtualization. The company is so confident in the product’s capabilities that they offer a free edition of the product that can back up two virtual machines. Obviously, the hope there is that users of the free version will pony up for the Standard Edition or Unlimited Edition (for $395 and $585 per Hyper-V host, respectively) to handle all their virtual machine backup needs.

The company provided me with an NFR (Not For Resale) Key so I could download the Unlimited Edition and take it for a spin around my various Hyper-V virtual machines. My test environment comprised two physical Windows 2012 R2 servers, each running four sessions of Hyper-V, for a total of eight virtual servers.

Installation of the product was a breeze, although there were several steps involved. The installation of Altaro Hyper-V Backup v4 consists of following prompts generated by an installation script and also knowing the basics about your network environment. For the most part, installation should take less than an hour, with most of the time spent answering some basic configuration questions and deciding on some configuration elements.That ease of installation corresponded with the product’s ease of use. Most functions and features are executed with a few mouse clicks. 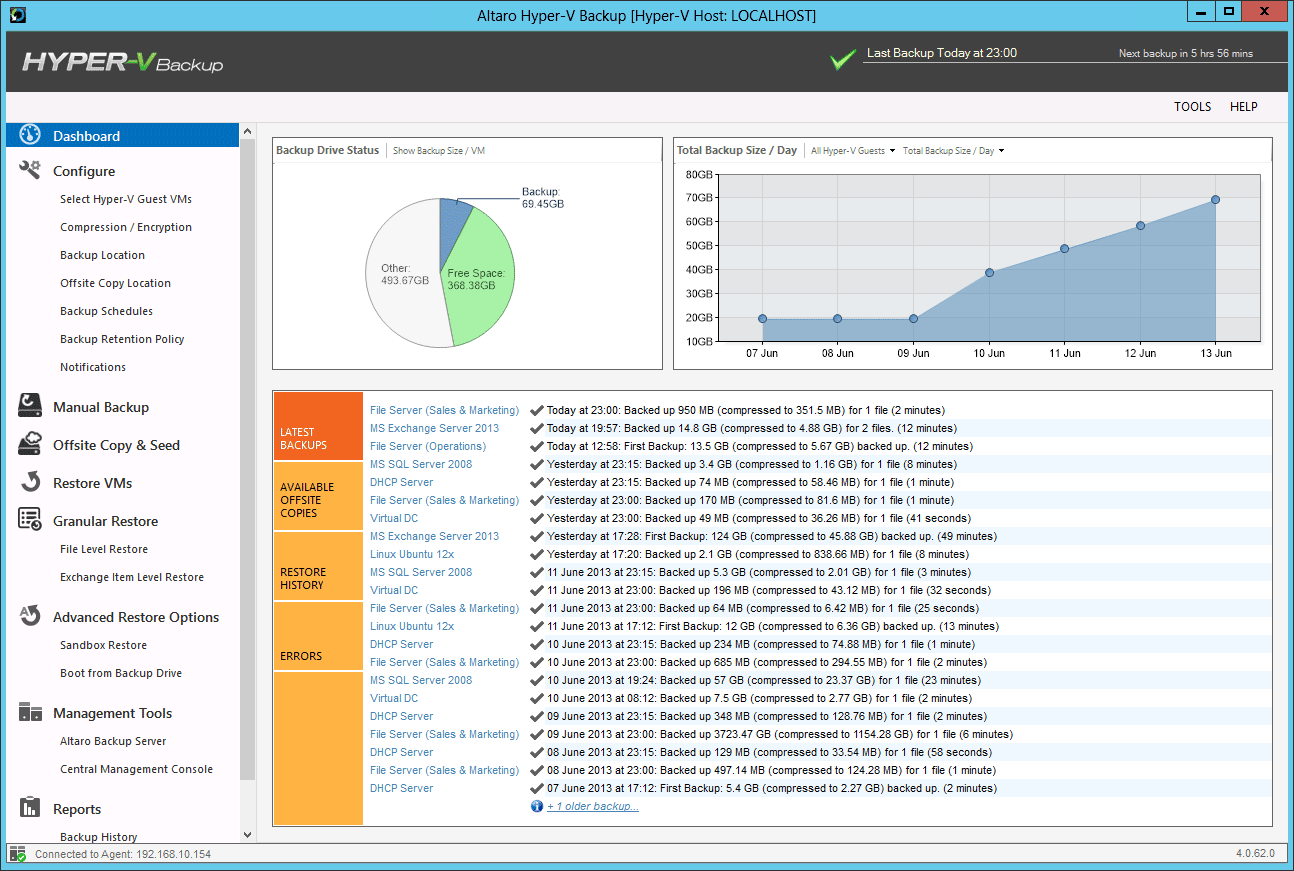 Nevertheless, the true value of most any product is determined by the feature set offered. Altaro’s comprehensive feature set includes:

The above are only some of the features the product offers. They provide a good indicator of the robustness of the product. 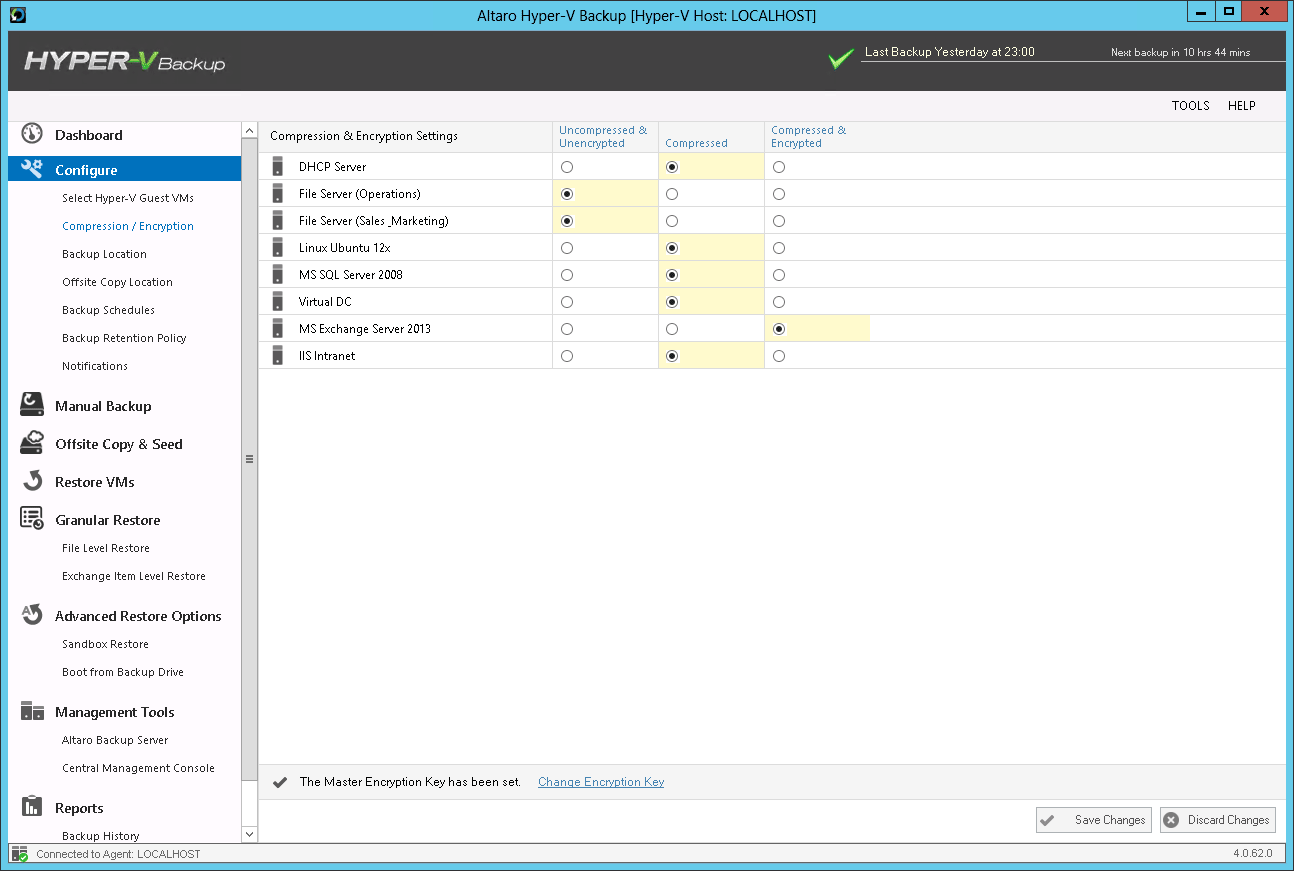 I designed several backup and restore scenarios to put the product through its paces, starting with the basic backup and restore tasks and culminating with a complex scenario that required moving a backed-up Hyper-V system to a new Hyper-V server, with reconfigured storage (a freshly added array), and creating a clone of a running Hyper-V implementation onto a remote system.

I encountered no glitches when backing up and restoring even the most complex of scenarios. Nevertheless, I did come across a couple of minor hiccups while using the product, which arguably could be blamed on either my test environment or some misconceptions I had about the product. For example, when moving a backed-up Hyper-V server into the digital sandbox for testing, I found it difficult to move directly from the sandbox into a production environment. After spending some time trying to do that, I gave up and just restored the backup to my production environment. Problem solved. 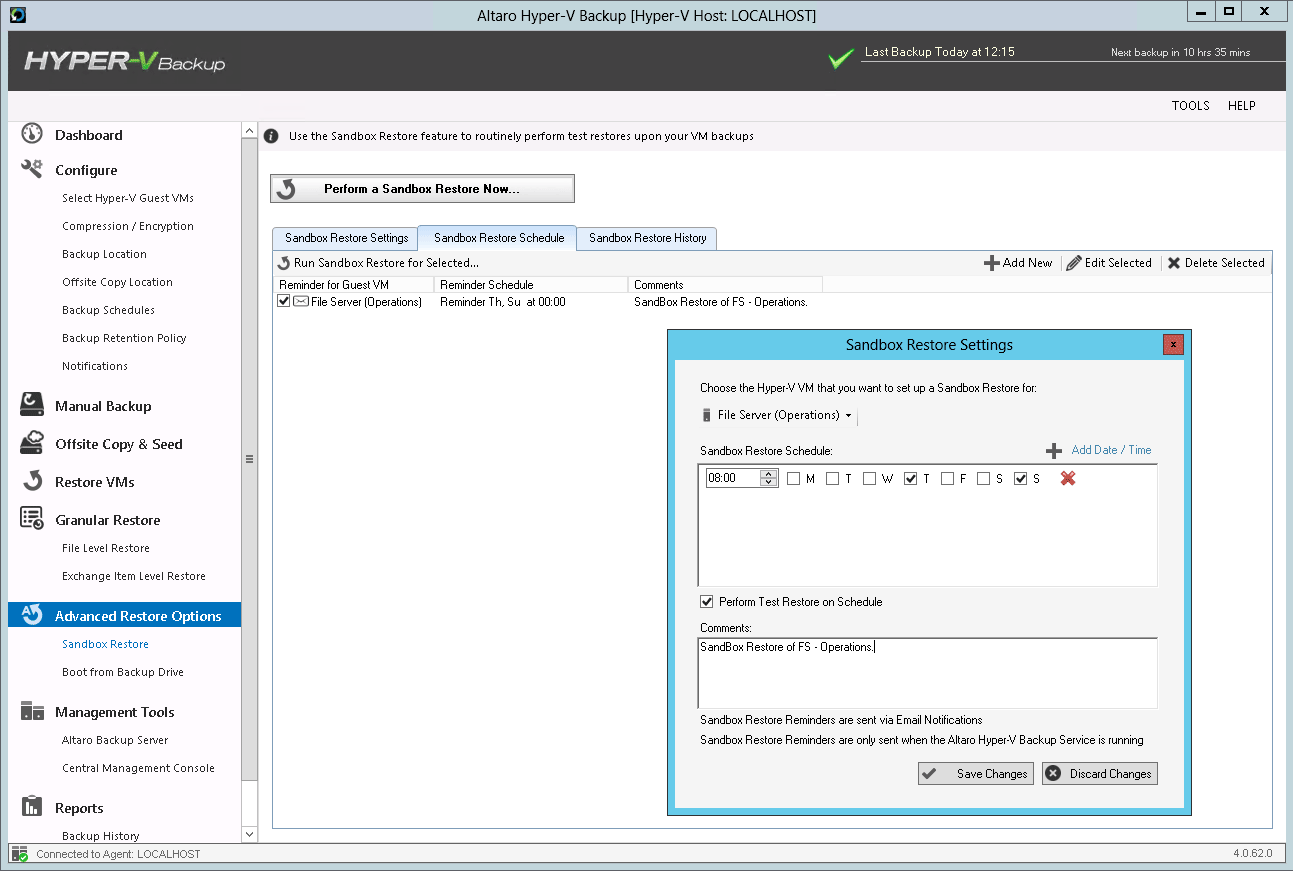 I also found working with Hyper-V clusters and shared volumes a little challenging. I got confused when dealing with which Hyper-V servers were running with which shared volumes. I think if I had named my volumes a little better than “Volumes X,Y, and Z,” I might have avoided that confusion. Lesson learned here is to use meaningful volume and Hyper-V server names when working with third-party backup products.

Other than those few issues, I found Altaro Hyper-V Backup simple to use, and I was very impressed with the speed at which the product performed. The company uses their proprietary ReverseDelta™ and OnePass Restore™ technologies to speed up backups and restores by a factor of 3 or more.

For the most part, all of the features were easy to get to and thoughtfully laid out. I found the ability to define retention policies particularly valuable. Here, I was able to define how long to keep backups, both onsite and offsite, and when to dispose of those files to reclaim disk space. The same ease of use can be applied to the encryption and compression options, where simple mouse clicks define what to do and automatically introduce those settings into backup jobs. Another powerful feature is the ability to save backup jobs offsite, where the backup can be routed through an Altaro Backup Server and use WAN acceleration algorithms to speed the transmission of the backup data to a remote system. The offsite copy wizard also supports NAS drives, USB drives and external hard drives to provide additional flexibility. 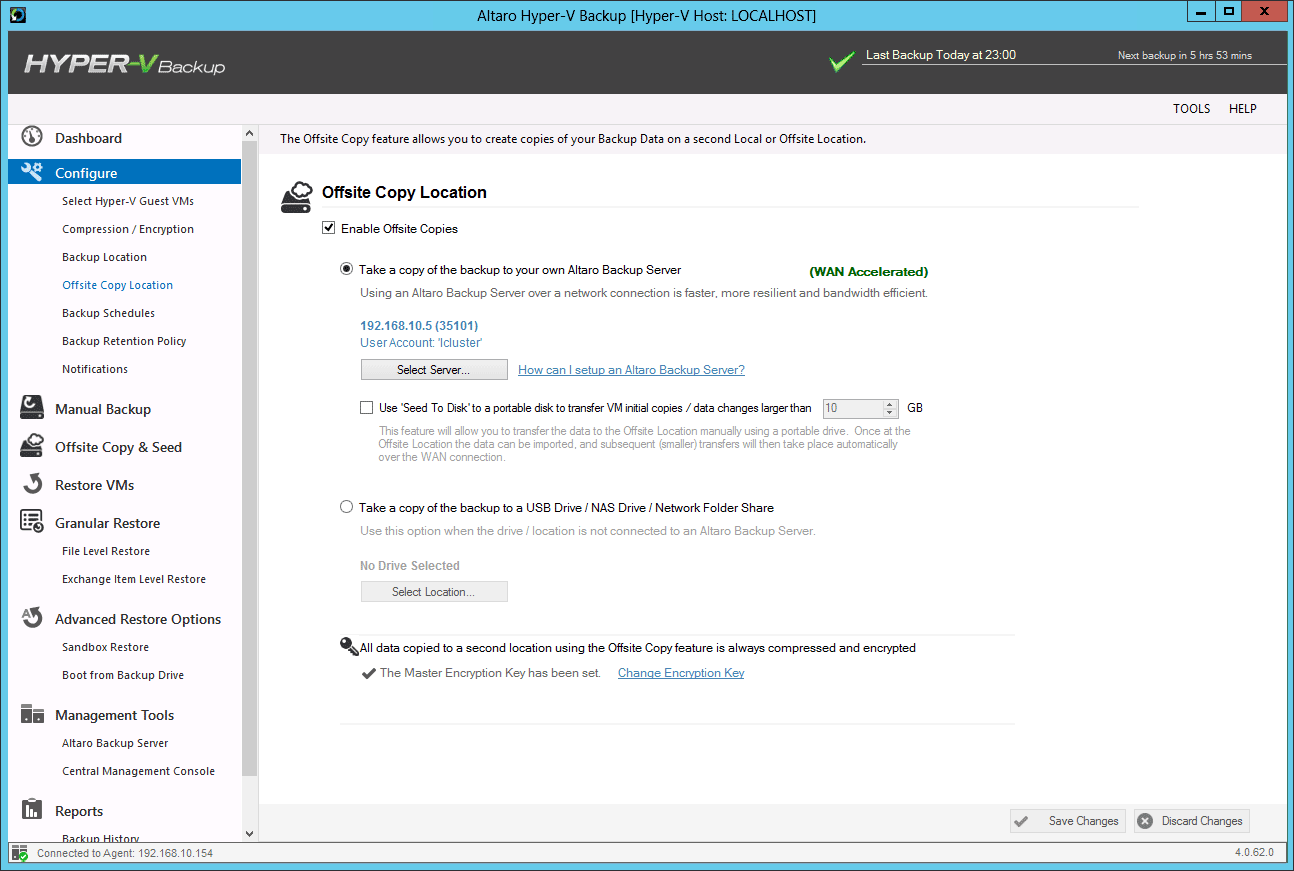 Altaro Hyper-V Backup v4 delivers what anyone would need to successfully back up and restore Hyper-V-based systems and even goes a bit further, delivering some innovative features that speed backups and introduce flexibility into the process. For those looking to back up complex Hyper-V environments, Altaro Hyper-V Backup offers a robust feature set that can handle most any circumstance. What’s more, the simplified licensing model makes it much easier to judge the value of the product and derive an almost instantaneous ROI while helping to keep things simple for harried network administrators.