LAS VEGAS – Frank Frankovsky doesn’t work for a hardware vendor. He works for Facebook as a leader of the Open Compute Project. Open Compute has already delivered new open source designs for server and storage racks, disrupting those markets. That was, apparently, only the beginning.

In a keynote at the Interop conference, Frankovsky took the stage after a string of proprietary hardware vendor executives and made it very clear that he’s cut from a different kind of cloth.

“We haven’t heard the words open source yet this morning,” Frankovsky began. 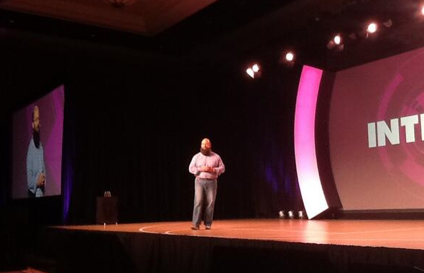 and open source are the keys to the continued growth of the Internet. In his view, the closed and proprietary nature of hardware will only limit innovation.

“Open source has had a huge impact in software, and it’s starting to have that same impact in hardware,” Frankovsky said.

It’s an impact that is about to get a whole lot bigger: the Open Compute Project is getting into networking. Frankovsky announced that a new networking project will officially form today, with its first meeting set for next week.

The new group aims at nothing short of reworking the network hardware world as we know it.

“The network layer has been immune from the positive impact of open source,” Frankovsky said. “There has been lots of great work in OpenDaylight and OpenFlow, but, unfortunately, network hardware is still sold as a black box, as an appliance, and if I buy a switch, it comes with an OS on it.”

“Our vision: you should be able to build bare metal, have pre-boot, and get an OS to load and boot,” Frankovsky declared.

In that model, a whitebox network hardware appliance can be built and then imaged on demand by the enterprise or data center network. Such a hardware appliance would not be locked in to the limitations of a prepackaged operating system tethered to the underlying hardware.

The key to the effort is open source. Frankovsky stressed that while companies can hire lots of great engineers, any individual company’s team will pale in comparison to the vast army of talent that an open source effort can assemble.

“The more people we can get to work on hard, complicated problems, the better,” Frankovsky said. “Openness always wins.”