IDC Puts a Number on the Networking Market

Rohit Mehra, vice president of network infrastructure at IDC, said that his firm predicts the total enterprise networking market for 2013 to come in at $42.4 billion. The Layer 2-3 switch market represents the lion’s share of that figure at 46.9 percent. The market for Layer 4-7 devices, including application delivery controllers, is growing, though Mehra is more impressed by the pace of WLAN growth. He noted that WLAN revenues grew by 28 percent in each of the last three years.

Moving forward, Mehra said that IDC predicts the enterprise networking market to exceed $50 billion, with growth across all categories, by 2017.

One of the most exciting categories to emerge in recent years is the Software Defined Networking (SDN) space. IDC forecasts that by 2016, the in-use SDN marketplace will generate $3.7 billion in revenue. That’s the same figure that IDC forecast for the SDN market in December 2012. At IDC’s Interop 2012 breakfast meeting earlier that year, the firm pegged the 2016 market at $2 Billion.

Mehra then detailed how some of the individual components of the SDN marketplace will stack up. IDC expects that SDN-related network infrastructure will represent 58 percent of revenues. The control layer piece will bring in 8.7 percent, while networking services and applications will account for 18 percent. The remainder of revenues will most likely come from professional services.

That said, Mehra admitted that the forecast is not complete, as IDC has not captured the impact on the silicon space. He also noted that overall, sizing the SDN market presents a challenge to analysts.

“We have been counting boxes for the last few decades,” Mehra said. “We as an industry are at the instantiation of a new era, where revenues come from software.” 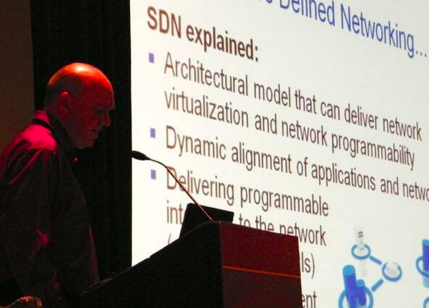 SDN, which can potentially enable a faster, simpler way to manage networks in an automated manner.

At its core, Casemore noted, SDN is about decoupling packet forwarding from the data plane. It’s also about providing management abstraction, visibility, and programmable interfaces. Finally, from a business benefit perspective, SDN is about the network providing more responsiveness to the applications.

For IDC, therefore, SDN is not a product or an endpoint. It’s an architectural approach.

While some have suggested that SDN will lead to network commoditization, IDC disagrees. Casemore noted that the supply chain for SDN is still being built out, and that takes time to gestate.