BYOD and the consumerization of IT continue to push the limits of enterprise IT and networks, resulting not only in productivity benefits and security challenges, but in unique opportunities to change how the enterprise works. One company hoping to capitalize on these opportunities is Houston, TX-based IT management software company BMC Software. This spring, BMC released MyIT, an iOS app designed to give enterprise employees personalized, automated access to corporate IT services and resources, making the lives of both end users and IT admins easier in the process. 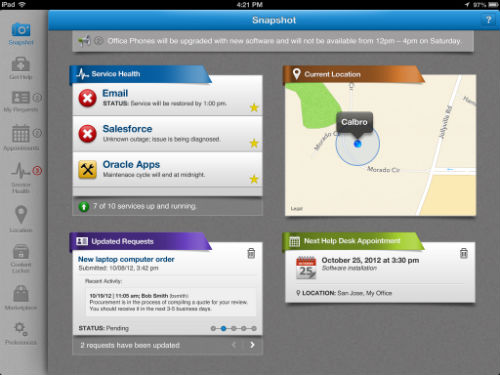 On the end user side, MyIT offers “a simple, flexible interface to IT-related information that they can consume when they want, where they want, and how they want,” according to Mark Settle, CIO of BMC Software and subject of a previous Enterprise Networking Planet interview. Users can, among other things, view the current status of services to which they have subscribed, receive service status change notifications, make requests for IT services or network or data access, and check the status and history of past requests. End users can even see and access network and local resources—from WiFi to printers and copiers—in floor maps of enabled locations. On the network side, meanwhile, MyIT can leverage location and authentication services to automatically provision and configure device access as devices enter the network.

BMC MyIT’s physical infrastructure requires the MyIT Server—installed on either a Windows or Linux machine—and an ITSM and RDBMS, with other components, such as an SMTP server, optional. Companies can start with just one MyIT server, even installing the data access component on the same machine as MyIT, and then cluster more to support larger numbers of end users. After installation and configuration, admins deploy the MyIT end user app to employee devices via URL or the enterprise’s app store, or by pushing it over the company’s existing MDM platform.

The company hopes that MyIT will help end the problem of “IT friction,” BMC’s term for the monetary and productivity cost associated with routine IT issues. Admins can spend more time working on the problems at hand instead of answering incessant requests for service status updates, for example. Other enterprise employees can receive faster access to help and resources when needed. Less time spent on IT problems, more time spent doing productive work: it seems to be a win-win situation for the bottom line.

And the bottom line always matters. If an app like MyIT can demonstrably improve that bottom line by streamlining IT processes, enterprises will sit up and take notice. Some already have, according to Settle. “An array of major global companies, including leaders in energy, packaged goods, and financial services, have lined up to be among the first to adopt and implement it,” he said. Among those companies is packaged foods giant ConAgra. Mike Tomasiewicz, Conagra’s senior systems and network administrator, called MyIT “the cornerstone of the future, giving business workers the ability to configure the exact tools they want and need.”

Much of the momentum behind BYOD and the consumerization of IT originates in employees’ desire for control over the devices and processes necessary to their everyday work lives. MyIT satisfies that desire by empowering enterprise end users in their interactions with IT. For companies in which IT friction is a problem, that sounds like a very good thing.