With Windows 10 flying off shelves at a price anyone could love (free for Windows 7, 8, and 8.1 users), enterprises are starting to feel a little left behind. Many enterprise administrators are hesitant, however. It’s always taken so much work to transition to a new desktop operating system. Yet Windows 10 promises to solve a plethora of problems, and users are starting to demand the ease of use and reliability that it delivers to systems currently hobbled by Windows 8.x.

Tranxition’s Migrate7 PC migration utility aims to assuage the pains of enterprise Windows PC upgrades by slipstreaming Windows 10 onto the endpoints of the enterprise. And the path to Windows 10 doesn’t stop there. Migrate7 automates the migration process and eliminates the need to manually create XML migration files, determine end user passwords, or even physically access the target machine.

Priced at $29 per seat with significant discounts on volume purchases, Migrate7 8.7 should eliminate most of the worry associated with moving the thousands of settings, files and other user persona elements from one OS to another. The company claims the product can save dozens of hours for each migration by eliminating the manual steps associated with moving user settings and files from one Windows OS to another. Migrate7 currently supports Windows XP, Vista, 7, 8 and 8.1, and, as of April 2015, Windows 10.

I downloaded the 30-day trial version of Migrate7 directly from the Tranxition website. The trial version supports 5 migrations over a 30 day period, and the company only requires a name and valid email address to try out the product. The company also sent me an unlimited license so that I could update the trial version to run the product on a network for an extended period of time and perform thousands of migrations if I wanted to.

Also, make sure to select the “create desktop shortcut” option, otherwise you may have trouble locating the executable to run the migration. The shortcut file can be copied to the install directory and pushed out to end users looking to perform a migration themselves, perhaps a good idea for smaller businesses and those looking to back up settings with the product.

The Migrate7.EXE located in the shared directory is the primary application, so creating a new shortcut file is a very simple matter. Running that application brings up a GUI that examines the PC that the application is being run on. It is important to note that personality extraction is the key feature. 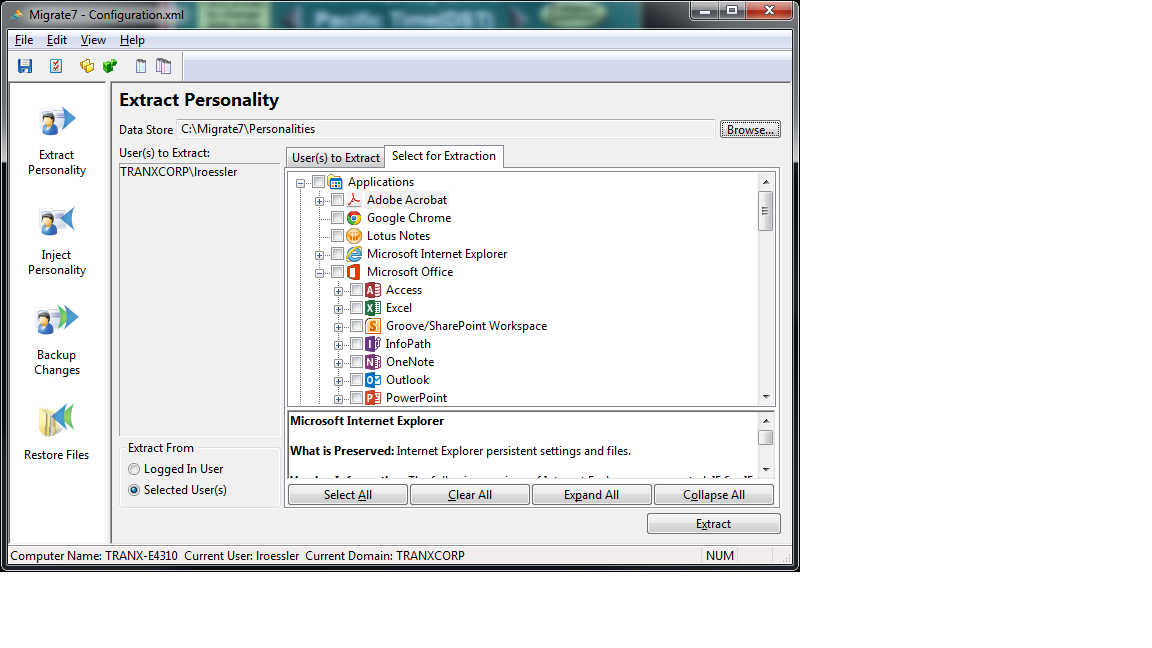 Migrate7’s personality extraction capabilities can gather hundreds, if not thousands, of settings. The extraction process can also capture configurations and preferences for applications such as Microsoft Office, QuickBooks, Chrome, and Acrobat. This helps to establish a complete “personality” profile of the PC, user, OS and applications, which can then be “injected” into a new PC or back onto the same PC after a clean install of a new Windows OS and applications.

In minutes, the extraction process parses, stores, and places all of the information on the defined network share, allowing users to access the stored information from a different machine to complete the injection process. Interestingly, the process also works as a nifty backup procedure. Scripted extractions can run automatically and the data stored to a remote share or cloud based file service. This enables Migrate7 to fit nicely into an existing enterprise disaster recovery plan.

For systems with lots of local files, such as documents, images, and so forth, the extraction process can take significantly longer. But Migrate7 does use a highly effective compression algorithm that greatly reduces the size of the stored data. All extracted information is saved to the network share under a subdirectory structure identified by the name of the system and user.

For most enterprise users, locally stored files should not be an issue. Best practices for network setup usually dictate that data be stored to the network and only preferences and settings stored on the local PC. When defining extraction policies, administrators should take that into account, making sure storage and time needed are kept to an optimal amount. Otherwise, extracting the full contents of thousands of machines could take up significant time and result in unnecessary duplicates of files. Once the extraction completes, it automatically launches Notepad and displays a detailed extraction log.

Although the guided extraction process using the GUI is impressive, the real power of the product comes from the scripting ability, which can then be tied into Active Directory policies to automatically execute extractions based upon rules set by the administator. Migrate7 also offers internal policy definitions, where rules can be defined for extractions, injections, and so forth. That allows administrators to create custom policies. Migrate7’s command line scripting offers thousands of options and commands, offering granular control over both the extraction and injection processes. All of the file and registry rules defined using the GUI can be exported out to an XML file for use as a scripted event, which in turn makes it much easier for administrators to define scripts without having to learn an arcane coding methodology.

Using the product, I was able to extract the personality of several different systems and then restore those personalities to other systems or back to their original systems, all without encountering too much hassle. Naturally, there is a learning curve to using a product such as Migrate7, but following a best practices document offered by Tranxition can flatten that learning curve significantly. Also, for most users and migrations, the default settings will prove adequate.

The key thing to remember about Migrate7 is that the product extracts and injects user and application “personalities,” not actual applications. Target systems will need applications pre-installed before injection. This shouldn’t pose a problem, since enterprise administrators typically already create images of the new OS and associated applications to deploy to new (or existing) systems. It’s in the user personalization process where challenges lie and where Migrate7 proves useful. The product’s scriptable personality extraction and automated injection functionality can make it a core component of the migration process.

Tranxition has enhanced Migrate7 to fully support migration to Microsoft’s latest OS. Migrate7 8.7 sports the ability to move specific settings, such as those associated with the Taskbar, Folder Options, Display Content and Keyboard Settings. That allows users to move more seamlessly from older versions of Windows over to Windows 10. What’s more, the product now has the intelligence to locate music and video files and transfer them into the appropriate source machine folders, adding iTunes, RealPlayer, and Windows Media Player migration capabilities to the roster.

All things considered, Migration7 can chop hundreds, if not thousands, of hours off any enterprise Windows 10 migration by automating the gathering of critical information and restoring it as part of an overall upgrade strategy.